Room at the inn -- Diane Mettam


One of our brothers in Christ, Howard Guetherman, shared his experiences staying in an “accessible” hotel room during a recent trip.  Although he doesn’t require an accessible room, he was told it was the only room available and so he took it.  As a member of our group, he was interested in what the room had to offer, and even more interested in what the room didn’t offer.  He thought this might make an interesting topic for us to discuss as a group, and perhaps an area for us to work on as well.

Howard’s room was good in some ways - room at the sink, around the toilet, and around the bed for a wheelchair to navigate, ample grab bars - and bad in others, only a bathtub and no roll-in shower (fine for people who can transfer to a shower stool if one is available), and a fixed shower at the “normal” height with no hand-held shower.  Howard’s biggest concern, however, is one that is rarely addressed:   the room was on the third floor.  When he spoke with the clerk at front desk and asked about plans to evacuate a disabled guest from the third floor in case of fire or other emergency, he was met with a chuckle and a suggestion that the person call the front desk to ask for help.  There was no guarantee that someone would be at the front desk to answer the phone.  When the clerk realized Howard was serious about his question, and his suggestion that the accessible rooms be moved to the first floor, the clerk stopped smiling.

What are your experiences with accessible rooms?  What are your thoughts about safety?  Personally, I have always asked for a room on a higher floor because I have trouble sleeping, and the soundproofing is so poor in most hotels that I prefer a room where I don’t hear the footsteps and other noises of the people above me.  I realize it’s a dangerous choice, however.

Very few rooms are ideal as far as accessibility is concerned.  Often the front of the sink is blocked off, so you can’t roll up in your chair, or the sink is so far back you wind up spitting onto counter.  Often you can’t see your reflection in the mirror over the sink.  Usually the coffeemaker or microwave is too high to use.  Floor space is often tight, and I find having a convenient outlet for my power wheelchair a challenge.  Many rooms are now putting in a lower peephole and a lower closet rod, for which I thank them. But thermostats and curtain pulls many times are still too high.

I’ve often thought it would be a great job to stay in accessible hotel rooms and give the management an assessment, to let them know what worked and what didn’t. The only standards I’ve found for accessible rooms* concern the bathroom facilities (bathtub with grab bars, transfer seat, or roll-in shower) and communications (visual alarms and notification devices). 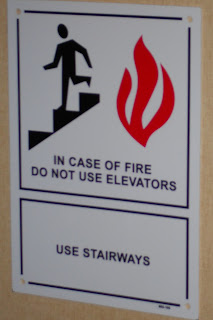 We thank you, Lord, that unlike Mary and Joseph, there is room at the inn.    The room may not always be a good fit, but it is there, a roof over our heads as we travel in your world.  Help us to be grateful for what we find, and to help make it better for those who follow.  In Jesus’ name we pray.  Amen.

*Correction - I found the ADA Checklist for New Lodging Facilities, which is quite thorough, but most of us are dealing with existing properties.  http://www.ada.gov/hsurvey.htm#anchor401170 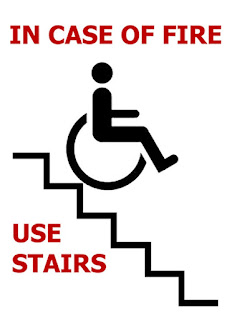 Posted by Disability Ministries group, United Methodist Church at 9:40 AM No comments:

News from UM Association of Ministers with Disabilities, 9/25/15

This is about dating -- but double standards still exist in many jobs as well, and especially ministry. We need to work together to end them.
http://www.leadonnetwork.org/wordpress/2013/08/08/when-will-the-disability-dating-double-standard-end/

Posted by Disability Ministries group, United Methodist Church at 10:54 AM No comments: 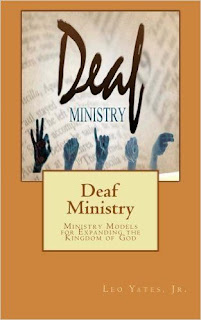 Leo Yates Jr., a member of the United Methodist Committee on Deaf and Hard-of-Hearing Ministries, as well as associate pastor of Calvary-Centennial Cooperative Parish, has written a new book dealing with Deaf ministries. The title is Deaf Ministry: Ministry Models for Expanding the Kingdom of God.

The book includes a foreword by Bishop Peggy Johnson, and then several chapters that introduce the topic, survey the models of ministry, explain how to get started, outline various types of accommodations, describe the ways of showing hospitality, as well as explorations of theology and disability. All of this is done with a goal of inclusion and growth.
It's available from Amazon in paperback or Kindle format.

UM Association of Ministers with Disablities -- News for 9/18/15

Shame: the bully on the mind's playground
http://sarahgriffithlund.com/2015/09/12/shame-the-bully-on-the-minds-playground/

Frustrated by silence at a funeral (hearing loops)
http://blog.aarp.org/2015/09/16/frustrated-by-silence-at-a-funeral/

From Nancy Webb: petition about service dog refusal at a Petco
https://www.change.org/p/reverse-petco-s-discriminatory-and-illegal-policies-against-service-dogs-and-individuals-with-disabilities
Posted by Disability Ministries group, United Methodist Church at 10:50 AM No comments:

God has this -- Diane Mettam


My dear friends, it has been a challenging few weeks, but I am so happy to return to you with new eyes and new hope.  I thank you for your prayers during my daughter’s family’s ordeal.  The incident was sadder than we first knew.  Mr. Henry was shot by his cousin as he answered a domestic violence call.  Because the man was his cousin, he didn’t wear his vest, as he thought he could talk the man down.  His cousin didn’t shoot the woman, he had only a knife at this time, but he stabbed three women, killing one of them.  The gun used to shoot Mr. Henry was his own, taken from him during a scuffle.  The gas station was set afire by the gunman as he left it.

My daughter is a teacher in Opelousas, a larger town near Sunset.  She teaches in the same school her sons attend.  The Principal was kind enough to call in a crisis counselor the following day, who met with Joy and my grandsons, Bradley and David, and with other children from the area who knew and loved Mr. Henry.

I have to share with what has sustained me, and sustained my family, during this dark time.  When Tony was finally allowed to return home, he was weeping.  He came in and said, “Mr. Henry is dead.  I’ll never see him again.”

God bless the faith of a little child, who sees things so clearly, and takes such comfort in the truth.  He patted his daddy’s arm and hugged him, and Tony did feel better.

Since that awful day, whenever David, sees any of his family upset, or when anything bad happens, he walks up to that person, gives them a hug, or pats their arm or shoulder, and says, “God has this.”

That has been my new mantra.  “God has this.”

It got Brad and me through a dark time last week when we unexpectedly lost Kirby, our surviving service dog.  We knew he had Cushing’s Disease, a malfunction of his adrenal gland, which we treated with daily medication and a special diet.  But we were shocked when he suddenly became ill one night, and didn’t wake us up for breakfast the following morning.  Brad rushed him to the vet early and came back for me.  He had a mass the size of a softball on his liver; how does something that large exist in a 22-pound dog and not be seen or felt?  It was cancer, and his prognosis was grim.  We did the kind thing and let him go, and we have had a hole in our hearts and a hole in our home ever since.  But God has Kirby, and he is better off.  Our hearts will mend.  We are searching the rescue sites and humane societies for the next possible companion, as we have been since Jake died, and perhaps our veterinarian in Bishop was right when she said we are the hospice for terminal rescue animals.

The Lord is my strength and my shield; in him my heart trusts; so I am helped, and my heart exults, and with my song I give thanks to him.  Psalm 28:7

Dear Lord, We thank you that even when things look their bleakest, you are there to hold us and comfort us.  There is nothing we face that we must face alone.  There is no burden we must bear on our own.  No matter what we hold, you hold us.  Help us to remember, and to let go.  Amen.

How we read: a sensory exhibit of books for blind people
http://www.howweread.co.uk/