News from UM Association of Ministers with Disabilities, 2/26/16

What is your church or agency doing to include people with disabilities in its materials? -- http://pushliving.com/the-neglect-of-disabled-representation-in-advertising-and-graphic-design/

News from UM Association of Ministers with Disabilities, 2/19/16

Reminder: annual dues are being requested now that a new year has begun. We are planning to produce a brochure and a video and be at General Conference. We count on the support of members to give us the funds to be an active caucus in the United Methodist Church that can really make a difference for the full inclusion of people of all ages with physical, cognitive, and mental health disabilities in the life of the church!
http://www.umdisabledministers.org/join.html


Do you ever draw a blank?  Have a great idea, and then when it comes time to put it to paper, you can’t remember it?  Or start what sounds like a great idea, and then it just fizzles?  That is what has been happening to me lately.  I sometimes think I should carry a recorder with me all the time, just to catch my “brainstorms” for later. But perhaps I’ll capture them, just to discover they weren’t so great after all!  I don’t know if this is a temporary condition, or another part of my new life condition, but it will be interesting to see what happens.

I was very excited a few weeks ago to read an article in Smithsonian about rocks.  Rocks? you might ask.  Yes, rocks.  The article, entitled “Life and Rocks May Have Co-Evolved on Earth,” seemed to confirm a theory I have held for a long time, and it made me feel a little less crazy.  I have always thought that rocks and minerals, like animals and plants, are living organic things; they just move at a much slower pace, more slowly than we can detect.  Each time we dynamite our way through a mountain, or drill a tunnel, or a well, we are harming a living thing.   And that in turn reminded me of a very controversial book I read back in the 1970s.

It was written by Dalton Trumbo, who had his own share of controversies.  He was a Hollywood screenwriter who was blacklisted for refusing to testify before the House Un-American Activities Committee in 1947.  He was forced to work clandestinely, winning two Academy Awards (for Roman Holiday and The Brave One) while using pseudonyms and “front” writers.  The book was Johnny Got His Gun, an anti-war novel about a young man named Joe Bonham, that won the 1939 National Book Award Most Original Novel prize.  (It was also made into a powerful film in 1971.)

What struck me most about the story was not Joe’s horrific wounds - he loses all his limbs and his face, including his eyes, ears, tongue, and teeth - but the way in which he is treated.  He is kept in a dark room with no sunlight, even though he can feel the warmth of the sun on his skin.  He can communicate by pounding his head in Morse code, but no one pays any attention to his wishes - only one kind nurse who has little power.  He asks to be placed in a glass box and tour around the country to demonstrate the horrors of war.  Of course his wish is not granted.  He tries to suffocate himself, but he has a tracheotomy he can’t control or remove.  His brain still functions perfectly, but he is treated as if he doesn’t exist.  He is utterly powerless.

Sometimes many of us feel like Joe.  We feel powerless to control our situations.  Our doctors or caregivers don’t listen to us, or don’t seem to hear us.  We feel violated, impotent.  We’re like rocks, mountains, being blasted and drilled, and no one thinks anything of it because we’re just there.  We’re not like “real” people, we don’t really matter.  It’s like my friend’s priest, who said there was no need to install an accessible bathroom, because people in wheelchairs “never came to church.”  “Did he ever think,” she asked him, “that maybe they didn’t come to church because they knew they wouldn’t be able to go to the bathroom?” 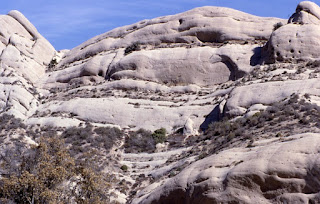 It is hard to reckon with unthinking people, especially when they’re clergy.  But it isn’t a call to lie down and quit trying.  It’s a call to be there, to remind them, to be the little pebble that scratches the lens in the glass that causes the person to focus more carefully.  We are not nothing.  We matter.  We are many, and we can be a force with which to be reckoned, if we just remember whose we are.

“For it was you who formed my inward parts;
you knit me together in my mother’s womb.
I praise you, for I am fearfully and wonderfully made.
Wonderful are your works;
that I know very well.
My frame was not hidden from you,
when I was being made in secret,
intricately woven in the depths of the earth.
Your eyes beheld my unformed substance.
In your book were written
all the days that were formed for me,
when none of them as yet existed.”  Psalm 139 13:16

Posted by Disability Ministries group, United Methodist Church at 8:38 AM No comments:

News from UM Association of Ministers with Disabilities, 2/12/16

Recently, a photo of a ramp built into a stairway has been circulating on Facebook. Many of our friends have expressed concern about this idea. Here is an article that puts these concerns together.
http://incl.ca/the-problems-with-ramps-blended-into-stairs/

Why the Lego wheelchair figure is important
http://thinkchristian.reframemedia.com/why-legos-wheelchair-minifigure-is-fearfully-and-wonderfully-made

Posted by Disability Ministries group, United Methodist Church at 11:29 AM No comments:

News from the UM Association of Ministers with Disabilities, 2/5/16

People with disabilities were once placed in institutions and forgotten. Now that we live in homes and less restrictive settings, medical and social communities are learning more about aging, and churches also need to adapt: http://www.post-gazette.com/news/health/2008/02/20/Self-sufficient-and-going-strong-at-77-with-spina-bifida/stories/200802200297

A list of petitions to General Conference, some sponsored by the AMD, is now available at the website: http://www.umdisabledministers.org/resource/16pet.html