"a new view of the world"
http://www.stltoday.com/news/local/metro/a-wheelchair-comes-out-of-storage-to-help-disability-advocate/article_09c20cea-d11c-57fe-8eb9-6f87bb76e761.html

Click here to join this e-mail list.
Visit us on the web or Facebook.
Posted by Disability Ministries group, United Methodist Church at 11:54 AM No comments:

Click here to join this e-mail list.
Visit us on the web or Facebook.
Posted by Disability Ministries group, United Methodist Church at 12:11 PM No comments:

It’s all been almost too much.  I can’t seem to shake this illness which affects different areas of my respiratory system.  Several friends have passed away in the last month or so.  Two more died this past week.  Another is fighting cancer and several serious diseases piled on top of each other.  A beloved teacher in my old hometown was murdered by her husband, who then took his own life.  My current wheelchair is not working so I’m using my old one, which has some problems but can get me around if I don’t press it too hard.  And I’ve started the painful process of requesting a new one from my physician and my insurance company.  I am fatigued beyond words.

Saturday was the celebration of life service for one of the pillars of our church here in Eureka.  It was also the service for my dear friend in Bishop who went to be with the saints.  And it was the day another church member here in Eureka went home to God.  His wife called me early in the morning to let me know.  I consoled with her, and made arrangements to sit with her during the church service later that day, where we hugged each other and shared our grief.

I recently watched a film about Mother Teresa called The Letters.  In it I learned that Mother Teresa suffered from what she called emptiness; she didn’t feel the presence of God within her, she felt totally alone.

I, too, often feel empty (not that I am, or could ever, compare myself to Mother Teresa), and I wonder if that is what allows me to give to others with such joy.  I feel a connection to God when I am serving others.  Perhaps not feeling God within her allowed Mother Teresa to see the face of Jesus in others.  Perhaps feeling empty allows each of us to serve as conduits, to allow the mighty force of God’s love to flow through us.  If things are going too well, perhaps we don’t think of God as much, and we don’t feel the need to reach out to others.  And perhaps we don’t rely on God so much.  Maybe empty isn’t such a bad thing.

“No, in all these things we are more than conquerors through him who loved us. For I am convinced that neither death, nor life, nor angels, nor rulers, nor things present, nor things to come, nor powers, nor height, nor depth, nor anything else in all creation, will be able to separate us from the love of God in Christ Jesus our Lord.”  Romans 8:37-39

And that love empowers us to do more than we could ever imagine doing on our own.  We can dream dreams so big we can change the world.

Dear Lord, Thank you for loving us.  Thank you for empowering us to share your love and your message with others.  Thank you for giving us the desire to want to make things better, and the strength to see things through.  With your help, we know we can build your kingdom here on earth.  In Jesus’ name we pray.  Amen 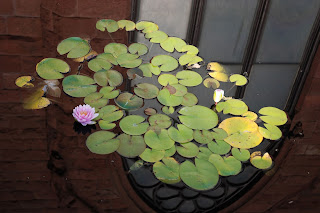 Posted by Disability Ministries group, United Methodist Church at 7:06 AM No comments:

A previous announcement mentioned a document adopted by the WCC. "The Gift of Being" can now be read at http://www.oikoumene.org/en/press-centre/news/a-vaere-menneske-er-a-vaere-sarbar.

What did we do before eyeglasses: a reminder of the role of social attitudes and technology in disability:
http://www.npr.org/sections/health-shots/2016/07/07/484835077/what-did-nearsighted-humans-do-before-glasses

Click here to join this e-mail list.
Visit us on the web or Facebook.
Posted by Disability Ministries group, United Methodist Church at 11:32 AM No comments:

I’ve always found the biblical narrative in John 9 about the man born blind to be a compelling one.  Jesus heals a blind man and when questioned by his followers, who mistakenly equate disability with sin or wrong doing, he replies, “Neither this man nor his parents sinned but this happened so that the works of God might be displayed in him.” (V. 3) He doesn’t stop there, however.  As he tends to do, Jesus takes things a step further saying, “As long as it is day, we must do the works of him who sent me. Night is coming, when no one can work. While I am in the world, I am the light of the world.”  (V. 4-5)

So, what does, “light of the world”, mean and, perhaps more importantly, what does this mean for me as a follower of the one who said it?

Well, if we look further, we see it is the not the blind man whose understanding of the world is problematic at all.  It is the people around him.  They don’t believe the blind man is the same person they’ve known all along.  When he says, “I am the same man you’ve known”, literally everyone other than the man’s parents, neighbors and religious leaders included, refuse to believe him.  In fact, rather than see and accept him for who he is, much less include him in daily life, they throw him out! (V. 34)

So, the question for me becomes, “Who am I not seeing” Who are the people I look past on a daily basis and why?  Do I write them off assuming the help they need is out there and they’ll find it?  Do I believe their reality is so far from mine I could never be like them?  The truth is when I slow the narrative down enough I’m not as far from the bottom as I think even when I don’t want to think it.
Have you ever consider how easily you could become "the least of these"? Circumstances beyond one’s control happen all the time and no amount of effort on his or her own will provide relief.   It is far more complex than simply pulling one’s self up by his or her bootstraps.

I was homeless for a time.  In my case, it was the result of a relationship breakdown, something that happens all the time. Fortunately for me I had a network of people willing and able to help.

What if I didn't have this help available? What if I didn't have money or credit to help me move forward? What if I wasn't privileged enough to have a motel owner look upon me with kindness, beyond my rough exterior from a month moving from place to place, and give me the opportunity to rent? Even now, finding myself more physically disabled these days due to unexpected knee replacement surgery complications, I'm trying to work my way through other affected areas of my life; not the least of which is finances.

Truthfully, I don’t think most people understand how easily, or quickly, they could become disabled.  Though, reality dictates this will be the truth for most of us if we live long enough and, again, this doesn’t even account for any number of other significant life changing events which could also happen just as it did to me.  Are we afraid to be confronted by this reality?

This isn't just about me, though, or even you.  It’s about awareness and working toward a world where people on the margins are redeemed and restored back into full community connection and relationship.  In short, we are called to work toward a world where everyone, regardless of our differences, is seen, which goes far beyond the ability of our eyes instead calling upon our heart.

Any number of things are happening right now which keeps a person from living their fullest life; something we all deserve.

I'm giving you a window into my world simply hoping you will think and then act, however and wherever you find the opportunity, in Christian spirit and kindness, to make sure others are included.  You never know, it could be me you’re helping or maybe I will help you.

That’s the beauty of our world.  Underneath all the other things which aren’t so beautiful, we are given a chance to participate, one and all, in God’s love story.  You get to be the light of God in the world.

Perhaps it starts with one simple question, “Who am I not seeing?”

Thank you for pondering with me.

Chris Wylie is an elder in the Upper New York AC who is currently on incapacity leave.)

Click here to join this e-mail list.
Visit us on the web or Facebook.
Posted by Disability Ministries group, United Methodist Church at 6:00 AM No comments:

The July newsletter of the UM Committee on Deaf and Hard-of-hearing Ministries is now available at the website. Read about the first Deaf Certified Lay Minister, upcoming meetings of the committee and UM Congress of the Deaf, best practices in Deaf ministry, and other topics.

All of the past newsletters are available at the DHM website, in both Word and Adobe formats. To read any of them, go to http://www.umcdhm.org/news/.
Posted by Disability Ministries group, United Methodist Church at 5:44 AM No comments:

When a pedi goes wrong: everyday life and working for good
https://specialneedsparenting.me/2016/06/29/when-a-pedi-goes-wrong-or-does-it/

EDAN reports that a WCC‬ Central Committee sitting in Trondheim, Norway on 28 June 2016 has adopted a new statement on persons with disabilities entitled Gift of Being: Becoming a Church of All and for All. The committee has commended the statement to WCC Member churches for further study. See http://www.edan-wcc.org/index.php/the-news/item/163-the-gift-of-being-called-to-be-a-church-of-all-and-for-all
--

Click here to join this e-mail list.
Visit us on the web or Facebook.
Posted by Disability Ministries group, United Methodist Church at 11:34 AM No comments: