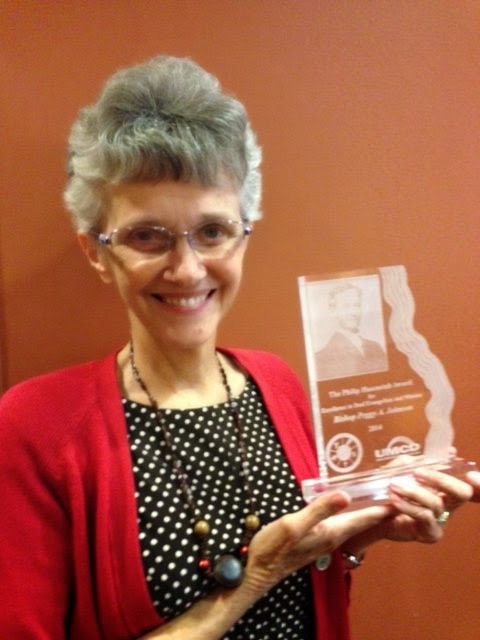 During the historic meeting of the United Methodist Committee on Deaf and Hard of Hearing Ministries, officers of the United Methodist Congress of the Deaf, who met with the Evangelical Lutheran Deaf Association and Episcopal Deaf Church, the first award for excellence in United Methodist Deaf mission and evangelism was given to Bishop Peggy A. Johnson.  Her work of 18 years ministry at Christ Church of the Deaf, UMC and present work as Bishop of the Eastern Pennsylvania-Delaware Conference demonstrated growth in both evangelism and mission. Her work in Kenya and Zimbabwe resulted in not only sending Deaf mission teams for the first time to those countries, but also identified and mentored a Deaf woman who later became the first ordained Deaf woman in the Methodist Church in Kenya. As Bishop she has advocated tirelessly for the Deaf, and has written a denomination-wide curriculum for the United Methodist Women, called The Church and People with Disabilities. Her other published work is Deaf Ministry: Make a Joyful Silence.