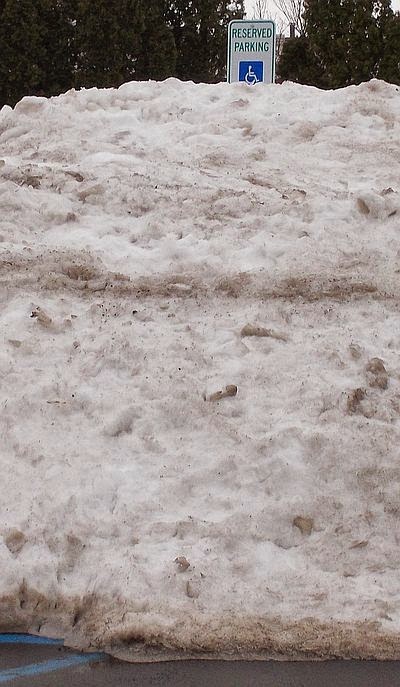 Recently I went to my credit union to conduct some business and there was a large truck parked perpendicular to the only handicapped parking space and cross-hatch loading area.  There was ample space in front of the other businesses in the mini strip mall, and across the parking lot, but the truck chose to park there because someone in it was installing a new ATM.

I had to park across the parking lot, which is always dangerous, and was more so in this case because the truck was also blocking part of the access into the parking lot.  I try never to park away from the building which I am entering because I am not visible to drivers when I am in my chair, and Eureka has had at least two fatal accidents involving wheelchair users in the past year.

I spoke to the driver’s assistant, who apologized for taking the space, but said he couldn’t do anything.  The driver, who was in charge, said he “had to park there” because the machine was heavy.  I asked to see his placard or license plate giving him permission to park in a blue space, and then I started taking pictures.  He continued stating that he had the right to take that space, and I continued taking photos.

When I went into the credit union, I asked the teller if he had called the police department to report the illegal parking.  He had not.  At that point the branch manager came out, and I asked her the same question.  She had not called, either.  I explained the law to her, and why it was important to me.  Besides being a matter of law, it’s a matter of safety.  She went out and told the driver he would have to move the truck to free up the parking space.  Victory!

I am not one to confront people, at least not on my own behalf.  I am ready in a heartbeat to intercede on behalf of someone else, but for some reason I am silent when it comes to me.  So I thought this was a double victory.  I think those of us who need those blue parking spaces have seen similar abuses, and perhaps we have shrugged our shoulders and said, “Oh, well.”  Perhaps it’s time we all gird our loins and protest.  In my case, the business owner’s concern for a customer’s safety was the deciding factor.

“Through patience a ruler can be persuaded, and a gentle tongue can break a bone.”  Proverbs 25:15

Dear Lord, Give us the courage to speak out for what is right, and the wisdom to use the right words.  Help us to know when to stand our ground, and when to compromise.  Thank you for the examples we find in Your living words, our holy scriptures.  Amen.
Posted by Disability Ministries group, United Methodist Church at 7:50 AM