By Bryan Branson, President
Deaf & Hard of Hearing Ministries Committee
It was with sadness that the news came of the passing of Rev. Robert (Bob) Walker on January 6th. He was 90 years old. Known to most as "Bob," his wife, Mardy, passed in 2003. He is survived by his three children.
Bob served as the first chairperson of the Deaf and Hard-of-Hearing Ministries Committee. A pioneer, Bob’s faithful work often came from his passion, as well as the Lord’s call on his life. Bob, who was hard-of-hearing and who had vision loss, supported the leadership and inclusion of persons who are Deaf, hard of hearing, late-deafened, and Deafblind.
“Bob was an outspoken leader with many accomplishments, some of which continue today. We are grateful for his faithfulness,” said Bishop Peggy Johnson. This and similar memories fill the tribute page at the United Methodist Congress of the Deaf's website. Rev. Leo Yates noted that “Bob spearheaded committee projects, such as Breaking the Sound Barrier: Ministry and Mission with People Who are Hard of Hearing and Late-Deafened and the book Speaking Out: Gifts of Ministering Undeterred by Disabilities that have contributed to more awareness and inclusion.”
Although he served the Deaf and Hard-of-Hearing Ministries Committee, this was not the only ministry Bob worked with. An ordained elder in the Pacific Northwest Annual Conference (PNC), he and his wife, Mardy, served in the Cal-Nevada Annual Conference prior to coming to the PNC. Bob continued to serve well into retirement. He aided the Disability Ministries Committee on legislation and other guidance, and was the editor of book Speaking Out, published by the Association of Disabled Ministers.
In remembrance of Bob, the Deaf and Hard-of-Hearing Ministries Committee is hosting a virtual memorial service is planned for Saturday, March 12th at 2pm Eastern. Persons interested in attending can register here. 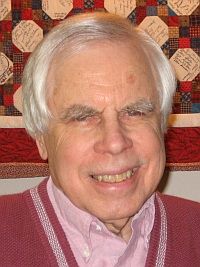